A Narrative of the Captivity and Restoration of Mrs. Mary Rowlandson 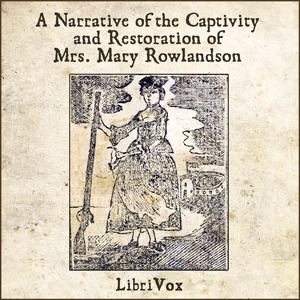 A Narrative of the Captivity and Restoration of Mrs. Mary Rowlandson

This is the story of Mary Rowlandson’s capture by American Indians in 1675. It is a blunt, frightening, and detailed work with several moments of off-color humor. Mary, the wife of a minister, was captured by Natives during King Philips War while living in a Lancaster town, most of which was decimated, and the people murdered. See through her eyes, which depict Indians as the instruments of Satan. Her accounts were a best-seller of the era, and a seminal work, being one of the first captivity narratives ever published by a woman. Without works such as hers, there would likely not be many modern works inspired by similar themes, such as The Searchers, starring John Wayne.(Summary by Matthew Scott Surprenant)

Reviewer: earthtomaui - favoritefavoritefavoritefavorite - February 14, 2011
Subject: womens history seminal note of faith of a captive woman and her children
This was an insightful narrative about a woman in the puritan era and the struggles to survive for both the captives and the captures. The powers of man, over thier slaves and the levels of extreme powers they used upon them. This woman; Mary Rowlandson (captive) was a believer, who was given a bible, by an Indian man (captures) and it was her "life saver". Her three children, 6yrs -10yrs old. Youngest died in her arms, other two enslaved by other masters. She was powerless, but sought hope through the scriptures of her bible. Only saw her kids a few times throughout her 11week, 5day Captivity. Later, they all would be sold back to her husband/father. There she learned many lessons... In the end they all learned to put there full trust "surrender" into there higher power/ Creator. I was able to compare where we now are in America(235yrs later). Women and the American lifestyle. It both astonishes me and yet disappoints me to see; the enourmouse blessings of hard work, efforts and democracy has given us today but, how "out of touch" we have become. Our sense of true appreciation for the struggles of the backs of our ancestors of various culturas. Most of us, only seem to get sents/whiffs of...

Reviewer: Dragonflyer - favoritefavoritefavoritefavorite - May 24, 2010
Subject: Interesting History
Although I would have expected more personal history, I still found this an interesting book. I especially enjoy the books by a single reader and this reading was very good I will look for more readings by this narrator.

Reviewer: matt_monster21 - - December 18, 2009
Subject: A Thanks from the Narrator
I am glad to see that my reading has been downloaded by so many people in so short a time. It is my first time recording and editing any audio recordings,so feel free to comment and critique my editing, reading, and the like. It is my goal that I primarily record rare works that others have not posted, and I wish to make them as high of a quality as I can. All comments, positive and negative are welcome. If you have an opinion on the reading, I encourage you to review my work.


Mary Rowlandson's account of her captivity among American Indians in New England in 1675 is both brutal and sympathetic. The Indians are portrayed as wild killers and slave owners, yet display moments of affection and kindness. One can see they are fighting for their lives, identity and way of life as they set out to kill the English in such numbers to drive them back into the sea. But it becomes clear the English are too many and despite victories in battle, there is an underlying desperation as the Indians stay on the run. Mary's memoir was among the first of the "captivity narrative" genre; and is an important historical document for her portraits of early American Indian life.

Listened to via LibriVox as read by Matthew Scott Surprenant. Clearly an amateur recording and difficult to follow at times as Matthew speeds too quickly through the words in places (pauses are good), but overall a strangely captivating reading style for the subject.

Uploaded by librivoxbooks on December 10, 2009